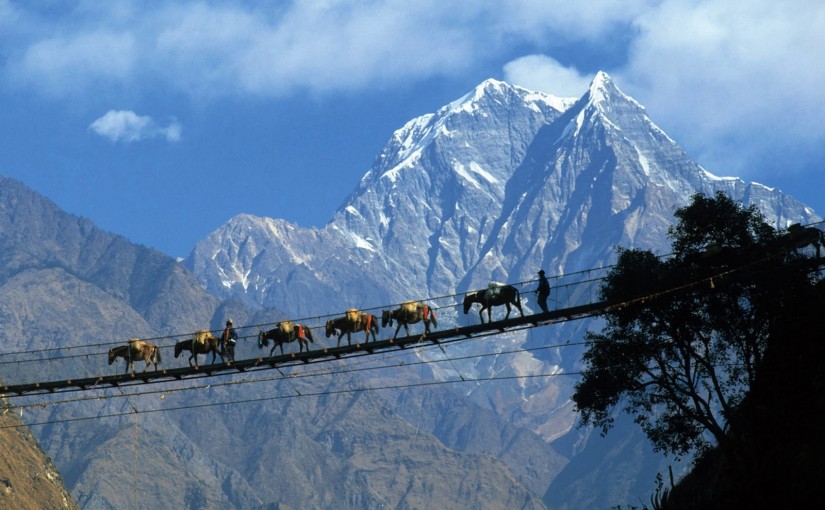 KHUMJUNG, Nepal: Phurba Tashi Sherpa, the most accomplished high-altitude climber in history, holds a bucket and crowbar as he claws through the rubble of his home seven months after Nepal's earthquake shattered the country.

Despite years of guiding wealthy foreign clients up Mount Everest, something he has done 21 times - a joint record - the 44-year-old has been left penniless.

Phurba Tashi's predicament is shared by many Sherpas, whose homes, lodges and restaurants were destroyed in the April disaster and who complain of a slow response from the government despite billions of dollars of Western aid.

Some retired guides must return to the peaks to earn money. Others are pulling their children out of schools in Kathmandu and hotel owners are firing staff.

To make matters worse, bookings so far point to a sharp drop in foreign mountaineers heading for Nepal in 2016, deterred by ruined infrastructure and an economic blockade along its border with India that threatens supplies of fuel and equipment.

"Everything I worked for was destroyed in a minute," said Phurba Tashi, standing in his village of Khumjung, a cluster of 80 stone houses perched on a plateau surrounded by breathtaking 23,000-foot (7,000-metre) mountains.The earthquake that killed almost 9,000 people destroyed his eight-bedroom trekking lodge, badly damaged his house and caused a deadly avalanche nine miles away on the world's tallest peak.The remote villages under Everest, which prospered in recent decades thanks to the booming climbing business, suffered some of the heaviest destruction in Nepal's deadliest disaster.

The Everest industry is in a state of upheaval following avalanches in 2014 and 2015 that killed 35 people, in the two most deadly incidents since climbers began ascending.In 2013, there was an unprecedented mass brawl between Sherpas and climbers that exposed deep-rooted frustrations over a lack of recognition of the risks local guides take to get foreigners up and down the fabled summit.

They want a bigger slice of Nepal's US$360 million-a-year (242 million pounds-a-year) adventure travel industry, of which Everest is the cornerstone.Bookings to scale the world's tallest mountain in 2016 have been a third to half lower than previous years, according to interviews with 18 of the largest climbing firms.This would be the biggest drop since commercial climbing began on Everest in the early 1990s, and could leave hundreds of struggling Sherpas without work."It has been two terrible years for Everest: we have had no summits and lots of fatalities," said Garrett Madison, who runs Seattle-based Madison Mountaineering. The team doctor died this year on the mountain and three Sherpas working for him were killed in 2014. "It will take time to restore confidence."In the past, deadly accidents have done little to dent Everest's popularity, with risk being part of the allure. But next year could be different, as threats to the industry take on a political dimension.

An economic blockade of Nepal's border with India could disrupt expeditions and deter would-be climbers, who typically pay a non-refundable fee of US$35,000 to US$100,000 for a chance to scale the peak.    Nepal has been facing an acute fuel crisis for three months since protesters in the lowland south, angered that a new constitution fails to reflect their interests, prevented supply trucks from entering from India.This is crippling the landlocked Himalayan nation as it tries to recover from the earthquake that displaced millions in the central and eastern regions.

Mountaineering firms say the blockade threatens the climbing season because there may be a shortage of fuel to airlift equipment, operate emergency rescue flights or provide enough cooking gas cylinders to survive for two months on the mountain.

"It is a crisis at the moment. It is going to be a catastrophe if this embargo continues," said Phil Crampton, the owner of the New York-based Altitude Junkies.Near the warren of royal palaces and temples in central Kathmandu's bustling old town, Gobinda Bahadur Karki, the director of Nepal's tourism department, is more upbeat.He predicts the blockade will be over before the spring and says he is "expecting a good number of climbers" next year, because mountaineers used to assessing risks will not be discouraged by a rare natural disaster.Back in Khumjung, the resentment is not just about the blockade tripling the cost of building materials that need to be carried from an airport three days' walk away.

In a rural community where nine of 10 homes were damaged or destroyed by the earthquake, anger is rising over the government's failure to spend US$4.1 billion of reconstruction money donated by foreign governments six months ago."We hear the politicians in Kathmandu are eating the money," Phurba Tashi said.Yuba Raj Khatiwada, vice chairman of Nepal's planning commission, is in charge of spending the money and understands the frustration over the delays, but says the blockade has absorbed attention and prevented aid work.    "It has put us back in the relief rather than reconstruction stage," he said.

For almost a century, western climbers have hired Nepal's Sherpas to do the most dangerous work on Everest. It is a lucrative way of life in one of the world's poorest countries, but comes at a cost.More than 200 Sherpas have lost their lives working in the mountains and as many have been disabled by rockfalls, frostbite, and altitude-related illnesses.Known as the "Everest Yak" because of his immense stamina, the quiet and diminutive Phurba Tashi is head Sherpa for Himalayan Experience, one of the largest Everest climbing companies.He is the record holder at 34 summits for mountains over 8,000 metres (26,000 feet).

Yet he says for most of his career he has been paid less than western guides. Foreign guides can make US$10,000-US$35,000 a season, whereas Sherpas typically paid about US$6,000, according to two western professionals.

Since the two recent disasters on Everest, Phurba Tashi has been under immense pressure from his family to quit. "I would rather we were poor than he took the risks," said Karma Doma, his wife, as she served guests Sherpa tea and biscuits.

In 2016, Phurba Tashi will take a break from climbing to appease his family, and will try to earn an income growing potatoes on a small farm.

But eventually, he says, he will have to return to the peaks to support his children.

He has spent his US$20,000 life savings and borrowed US$10,000 to rebuild his home and lodge, both surrounded by rubble.

The next time he climbs Everest he will be break the record. "A lot of people tell me I should go one more time to break the record, but it doesn't mean anything to me," he said. "Since the earthquake, when I look back at my career, my biggest disappointment is that I am still worrying about my future."